German tennis player Alexander Zverev was defeated by Russian Daniil Medvedev at Paris Masters Final. Medvedev won his first title of this year 2020 in the empty stadium of Bercy Arena. 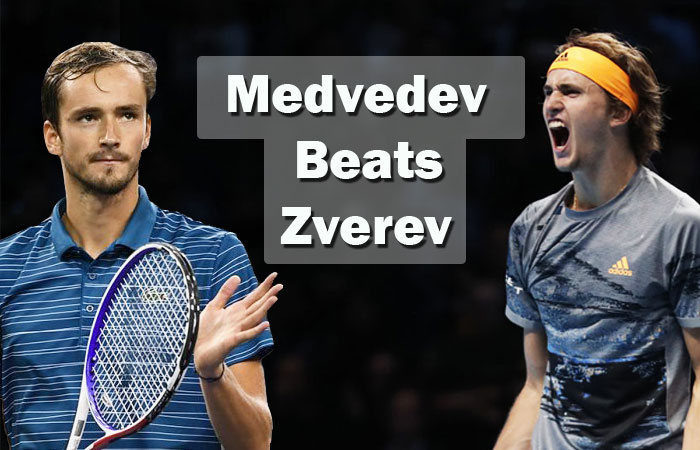 This was Medvedev’s eighth ATP title of his career, he defeats Zverev for 5-7 6-4 6-1. After winning his Masters title the World number 5th said that,” It is a great match and I am really happy to win”.

He said that he used to lament to his wife that he didn’t won any titles this year but now he is very happy with his great success.” It’s my third Masters title I’ve increased my level up and I’ll keep trying to improve my level more”.

Alexander Zverev the World number 7 won two titles in Cologne and also defeats Rafael Nadal in semi-finals. He also became the runner up in US Open 2020. Medvedev achieved his first title last year in China, and he defeats Milos Raonic 10th seeded for 6-4 7-6 (7-4).

Medvedev and Zverev previously met seven times but this was the second win for Medvedev and he defeats Zverev within two hours and seven minutes. Zverev explains his experience in the finals,” After completing the second set I felt really tired, I am helpless and the next set was exactly difficult for me”.

Both the players will meet again in the ATP finals in London, and the matches will starts on November 15 to 22. “Let’s see how the match will be in London, I am fine with my playing. I simply need some physical betterment” Said Zverev.

Get Latest Tennis News and Sports News stay connect with us.