There isn’t much lacking from Frankie Dettori’s racing CV. The three-time Champion Jockey has claimed over 250 Group 1 winners, 20 English Classics, a six times winner of the Prix de l’Arc de Triomphe, the Japan Cup, the Breeders Cup Classic – he’s essentially raided the top racing prizes in every country around the world. But there is a glaring omission from Dettori’s CV – the Melbourne Cup.

The Melbourne Cup is, of course, the highlight of the Group Racing calendar in Australia. While it’s not the only big prize on offer in the Australian spring season, it’s the one that captures the imagination more than most. Dettori has gone to Australia many times in his career, and he has had big chances in the Melbourne Cup. But one of the greatest jockeys of our generation always seems to be bamboozled when he performs in Australia. His career stretches back to the 1990s, but the 51-year-old legend has but one major win in Australia, winning the AJ Moir Stakes in 2002.

Dettori vowed to come back to Australia

A couple of weeks ago, Dettori made it clear that he would be once again heading to Australia in November for a shot at one of the biggest prizes in world horse racing. It seems like a no-brainer that top trainers and owners would want the Italian to saddle their charges in the blue-chip events across the Melbourne Spring Carnival. But there is something of a catch, and it’s not Dettori’s record in Australia that is the problem.

Dettori’s form has been such that critics are wondering whether his career is winding down. Indeed, he has had an acrimonious split from the Gosden Family, the training team with whom he has partnered for so much glory over the last eight years. While Dettori has always been free to ride for different trainers, these loose partnerships have always been part and parcel of elite racing. In footballing terms, Dettori has become a free agent in the last couple of weeks. And you can be sure that other trainers will be interested in his services.

Ascot was a disaster for Italian jockey

The fallout with the Gosdens came at the site of some of Dettori’s most glittering successes – Royal Ascot. The June 2022 meeting was a difficult one for Dettori, who bemoaned bad luck across the week. His lone success came in the Coronation Cup on Inspiral, but the Gosden Family and connections were reportedly upset at how Dettori rode Stradivarius in Royal Ascot’s showpiece event, the Ascot Gold Cup. In television interviews, the owner of Stradivarius made it clear who he blamed for the bad performance, and it wasn’t the horse.

Dettori’s woes at the moment do highlight the importance of jockeys in racing. Too often, the person in the saddle isn’t given enough credit for their skill and stewardship. Dettori has proven time and time again over the last three decades that he has a magical touch for riding, but critics will now claim that touch is waning for one of the oldest jockeys on the circuit.

Still, Dettori has been written off before. Indeed, his partnership with the Gosdens was borne out of a down period in his career. Will elite trainers and owners start taking a chance on the mercurial Italian? Could he finally find that elusive success in Australia? It will be interesting to see how it plays out, especially as one of the most decorated jockeys in the history of the sport claims he is not quite done yet. 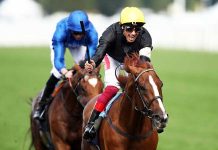