IPL 2020 : Kolkata Knight Riders will have a battle against Sunrisers Hyderabad on 26th September IPL 2020. In this 13th season both the team lost their first game to their opponent teams. The entire batting order got changed in the tournament and it is so curious to see whether the KKR captain Dinesh Karthik batting at No 3.

Kolkata Knight Riders faces Mumbai Indians and Sunrisers Hyderabad faces Royal Challengers Bangalore in their first game and in this second match both the team will try to grab their first success.

In this second game KKR is not going to make any much correction in the team. Sandeep Warrier is going to replaced by Prasidh Krishna because of his poor playing tactics and The team captain Karthik should use Pat Cummins during the tricky periods. 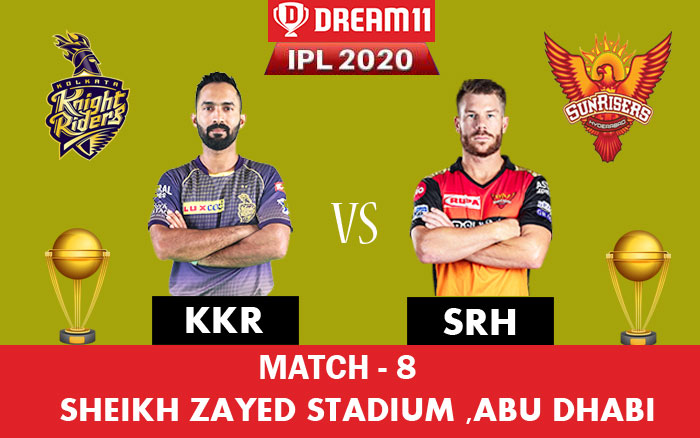 Bowlers of Mumbai Indians are always better than Kolkata Knights they loss many good chances that night. Pat Cummins, the notable player for bowling got defeated by Rohit Sharma the Captain of Mumbai Indians. Meanwhile Jonny Bairstow’s withdrawal makes Sunrisers Hyderabad lose hope on winning Royal Challengers Bangalore and it leads the team to lose the game by 10 runs.

The ankle injury of all- rounder Mitchell Marsh puts the team in distress and he was replaced by Jason Holder but he didn’t perform well in this first game. In this second game Mitchell Marsh will be replaced by Mohammad Nabi and in the place of Abhishek Sharma, Virat singh will get select as their middle-order.

Thus in the previous game both team faced many injuries and losses so we can expect a spectacular match by their defeats to won their first winning note.

Match details of KKR Vs SRH

The temperature will be around 35 to 32 degree in Abu Dhabi so it is expected to be hot and sunny during the match. No chances of rain and there is a little chance of wind in the evening. Abu Dhabi stadium is still favors for bowlers so it will be nice to watch the bowling attacks of both teams. Inspite of the losses while chasing, captains who won the toss will choose fielding first.

Both the teams lost their first match and in this second match it seems that Sunrisers is more comfortable in bowling attacks when compared to Kolkata Knight Riders. So we can expect that SRH have a little chance to defeat over KKR.

Live telecast will be on

To get more IPL T20 News Stay connect with us.