Quinton De Kock Childhood and Early life:
Quinton De Kock did his schoolings at King Edward VII High school, the former South African Skipper Graeme Smith and Neil Mckenzie studied in the same school. In ICC U-19 World Cup Australia he becomes the highest run scorer in his team. In total six matches they scored 284 runs and it makes him famous in that period. In 2012 he received a call from national level by his match winning performance in the Champions League. In IPL he played for Sunrisers Hyderabad, Delhi Daredevils, Royal Challengers Bangalore, and Mumbai Indians. 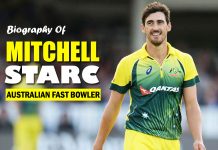 0
Indian famous Cinema Actress Anushka Sharma, who announced her pregnancy in August,she posted some stylish maternity pics in Instagram. Let's we take a look at... 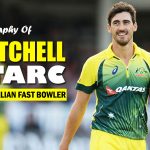 0
Mitchell Starc is an Australian International cricketer belongs to Australia. In domestic cricket he plays for New South Wales and also a member of...

David Warner got Injured in his Groin and Left from the ODI and T20...

0
India vs Aus 2020 : Australian Opening batsman David Warner got an injury in his groin and was dismissed from the third ODI and...

0
Here we can see Nicknames of all best England Cricket Players with their own names. Still we don't know nicknames of our favourite England...

0
India had a clash with Australia in the One day International match at Sydney, Australia. Indian Cricketer Hardik Pandya scores half a century within...

0
Thomas William Maxwell Latham is a New Zealand International cricketer who was famously known as Tom Latham. In National test cricket and One day...