IHF (International Handball Federation)has been organized the IHF Men’s Handball World Championship from 1938 onwards. Denmark is the current champion and they hold their second title at the 2021 tournament in Egypt. The most title winner is France with six titles and Sweden and Romania with four titles each.

Keep connect with to get more Handball News and Updates. 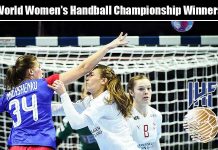